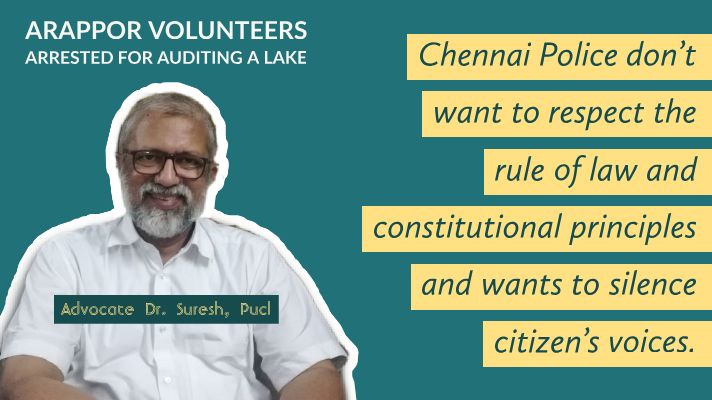 I am Dr. V. Suresh, Advocate, and human rights activist. I am also the National General Secretary, People's Union for Civil Liberties (PUCL).

I am writing this message bringing to your attention the action of Inspector Devaraj of Taramani PS in detaining a team of water rights activists belonging to Arappor Iyakkam who were visiting the Kallukuttai Eri (lake) in Perungudi as part of a Citizen's Audit of the lake.

The citizen volunteers of Arappor Iyakkam for some months have been involved in a citizens audit of water bodies in and around Chennai to identify the issues and improvements required to safeguard and improve the water bodies. The visit to Kallukuttai ErI today is part of a months long enquiry by the water rights campaigners.

The police, led by Inspector, Mr. Devaraj, today demanded to know if the team, led by well known water rights campaigner, Mr. Haris Sultan, had prior police permission. When the 10 member team asked under what law they needed to get prior permission and what was the procedure so that they will get it, they were told that they were being arrested. There are video clips of the team being forced to enter the police van which took them away.

We hear that they are now being kept in Hema Mahal in 100 feet Road, Taramanu, prior to being remanded.

We would like to strongly protest against this highly handed behaviour and illegal action of the police which is in brazen violation of all the fundamental rights and other protective provisions in the Indian Constitution and other laws relating to arrest etc. It is also a naked attempt to frighten and silence citizens from becoming pro actively involved with the protection of their water bodies, assertion of the right to water as part of fundamental right to life and to ensure water security for the state.

We fail to understand which law exists that requires citizens to get prior police permission to visit water bodies which exist in the public domain, to conduct a citizens study leading to suggestions for it's improvement including by involvement and participation of local people. The water rights campaigners team was by no stretch committing any illegality warranting forced arrest and removal from the area.

It appears that the Chennai Police don't want to respect the rule of law and constitutional principles and wants to silence citizen's voices. The situation is so pathetic that even to conduct peaceful agitations and protests, the police routinely reject applications for permission, forcing organisations to approach the High Court.

Such anti-democratic acts of the city police, and police highhandedness and abuse of law is deplorable and to be condemned.

I request you to kindly intervene personally, ascertain facts and arrange to get the water rights campaigners of Arappor Iyakkam released forthwith.