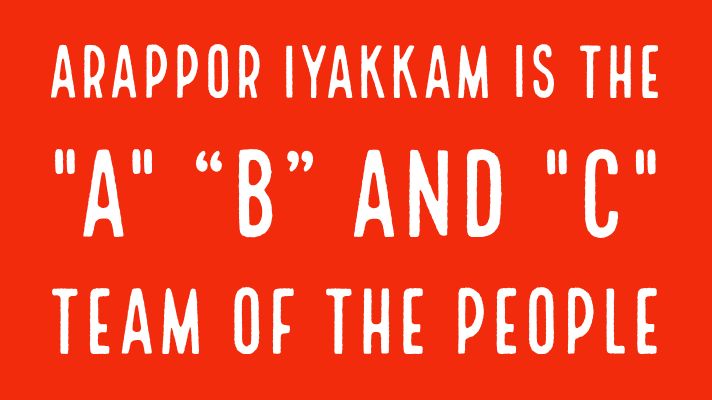 1. When and How was Arappor Iyakkam formed?

What is Arappor’s Mission and Vision?

To achieve a Just and Equitable society

2. What is Arappor’s current focus?

Arappor Iyakkam’s current focus is to build a vibrant civil society through an approach of building a large people’s movement that engages actively in public issues around them. Arappor Iyakkam strongly believes that the powerful and others have various ways of addressing their issues. However, the vulnerable, poor, middle class and voiceless sections of society affected by injustice can only take forward their issues and solve them through collective strength of people and therefore, it is highly necessary to work as a people’s movement. Arappor Iyakkam since its inception has become a voluntary movement steered by 1000s of Volunteers and Supporters. Arappor has been mainly working in Chennai so far and the current focus areas of work include Anti-Corruption, restoration of waterbodies, creating large scale awareness on citizen rights and working on ward level civic issues.

3. Why does Arappor focus on Anti-Corruption a lot?

Arappor Iyakkam believes that Corruption is a major menace that cuts across all streams of Governance and unless it is significantly brought under control, we could never achieve our dream of a Just and Equitable society. Therefore, Arappor Iyakkam has been striving to address issues of Corruption through bringing out Corruption of Top Ministers and officials, file legal cases on such Corruption with evidences, continuous campaigns for bringing out Transparency and Accountability in various Departments, increasing citizen participation in questioning various Corruption around them and also actively engage in pushing for changes in laws that will improve Transparency and Accountability significantly. Arappor’s advocacy on Anti-Corruption includes Right to Services, non-amendment of RTI, formation of a Independent Lokayukta and Implementation of Ward Committees to ensure citizen participation in decision making in each ward.

4. What is Arappor’s approach towards law of the land and the Government?

Arappor strongly believes in the Constitution of India, its constitutional values and the fundamental rights of Citizens guaranteed under Constitution. Arappor fights injustice non-violently with truth and evidence. Arappor believes that non-violence is legally, ethically and morally right and also the best strategy to fight injustice, misuse of power, and corruption. On one side, we strive to constantly oppose Corruption of public servants and others by exposing them, protesting them and filing legal cases on them but on the other side, we also engage continuously with the Government by talking to them, making advocacy efforts to improve Transparency and Accountability.

5. What has Arappor achieved so far? Can you share some success stories?

Arappor Iyakkam’s work has resulted in various changes over the last four years. Some of them include:

6. How does Arappor take care of its expenses?

Arappor Iyakkam’s expenses are primarily taken care of by individual donations of hundreds of our volunteers and supporters. Arappor truly believes that as a movement we need to be funded by the people themselves rather than organizations or companies. While Arappor demands Transparency and Accountability from Government, it is extremely important that we remain transparent and accountable for the donations and expenses. Therefore, our donations with list of donors and audited expenses filed with the Income Tax every year is displayed transparently in our website www.arappor.org

7. How does one volunteer for Arappor? What are the volunteering opportunities?

You may register with us as a volunteer in our website at www.arappor.org or drop into our office in Egmore. Depending on your skillset and interest, there are varying volunteering opportunities. You can be volunteer taking responsibility for your ward and its civic issues, you can be a volunteer focused to work on restoring waterbodies in your area or you may volunteer in organizing our centralized events of Arappor or you may help us offline with computer work, research work and calling campaigns. Arappor regularly conducts Know Your Rights awareness event every week which will be a good starting point for new volunteers to attend.

8. Is Arappor’s work opposed to the Government?

Arappor’s allegiance is to the Constitutional values of India and ideals of Justice and Equality. Therefore, Arappor is not against the Government but only against the Corruption and Maladministration of the Corrupt within the Government. Arappor over the last 4 years have worked and engaged with the Government several times. Arappor worked with Chennai Corporation before the 2016 monsoon to solve issues of storm water drains. Arappor have been continuously engaging with the Metro water Department to solve issues of sewage into waterbodies until now. Arappor also recently trained around 200 public information officers of the Government on Right to Information act. Therefore we are not opposed to the Government. We are for a Transparent and Accountable Government at all cost.

9. Does Arappor support any political party?

Arappor Iyakkam is primarily into people’s politics and we are not into Electoral politics. Arappor Iyakkam is about the politics and issues of people between elections and not during elections. Therefore, Arappor Iyakk am do not support any political party and have never supported or endorsed any political party. For Elections, Arappor focus is to create an informed citizenry and therefore releases the assets and criminality of all candidates contesting in each constituency to the respective voters in every election.

10. Why does Arappor focus on ruling party’s Corruption most of the time? Is there any political party behind Arappor?

As a citizens group, it is important to focus on people’s issues today. Both engaging and questioning our public servants/ elected representatives are important duties of us as citizens. There is more responsibility on the ruling government who have been elected to represent and perform for citizens. So naturally there will be more questions directed at them. Therefore, whenever we raise issues of maladministration, corruption etc of the current ruling party, the supporters of the ruling party accuses Arappor as agent of the opposition. Nevertheless, as Arappor Iyakkam, we are clear that our duty is speaking truth to the power, irrespective of whoever is in power. This doesn’t mean the current opposition or others are sacrosanct. There are several instances of their corruption and maladministration such as 2G, INX media, encroachments etc about which Arappor has been very vocal about. Also, we have been vocal about how the ruling and opposition parties are in collusion when it comes to issues such as corruption in many instances.

12. Why is Arappor focusing a lot on Chennai Corporation?

Arappor Iyakkam has shown how prefixing of Tenders in Chennai Corporation is resulting in hundreds of crores of losses to the exchequer. While it may be easier like others to report Corruption and move on, Arappor Iyakkam feels that it will not bring about a lasting change. Chennai Corporation has a budget of around Rs 5000 crores a year and affects our life everyday. Chennai Corporation is responsible for most of our civic issues such as roads, storm water drains, Garbage, small waterbodies, urban primary healthcare centres, corporation schools, open spaces, parks, planning approvals etc. However, most tenders of the Corporation are illegally prefixed for a specific set of contractors without competition. Issues like road height getting higher than our houses is a direct consequence of corruption in Chennai Corporation. Therefore, Arappor Iyakkam is committed to focus on Chennai Corporation for a long time to bring about lasting changes in the tender system, ensure participation of citizens in decision making of civic issues by making ward committees functional as enshrined in the 74th amendment of the constitution and help in making Chennai a liveable city for all.

13. When will Arappor expand to other districts?

Most of our efforts are currently into building ward teams in each ward of Chennai. Once we complete building a team in most wards of Chennai, Arappor Iyakkam will start expanding into other districts of TamilNadu.