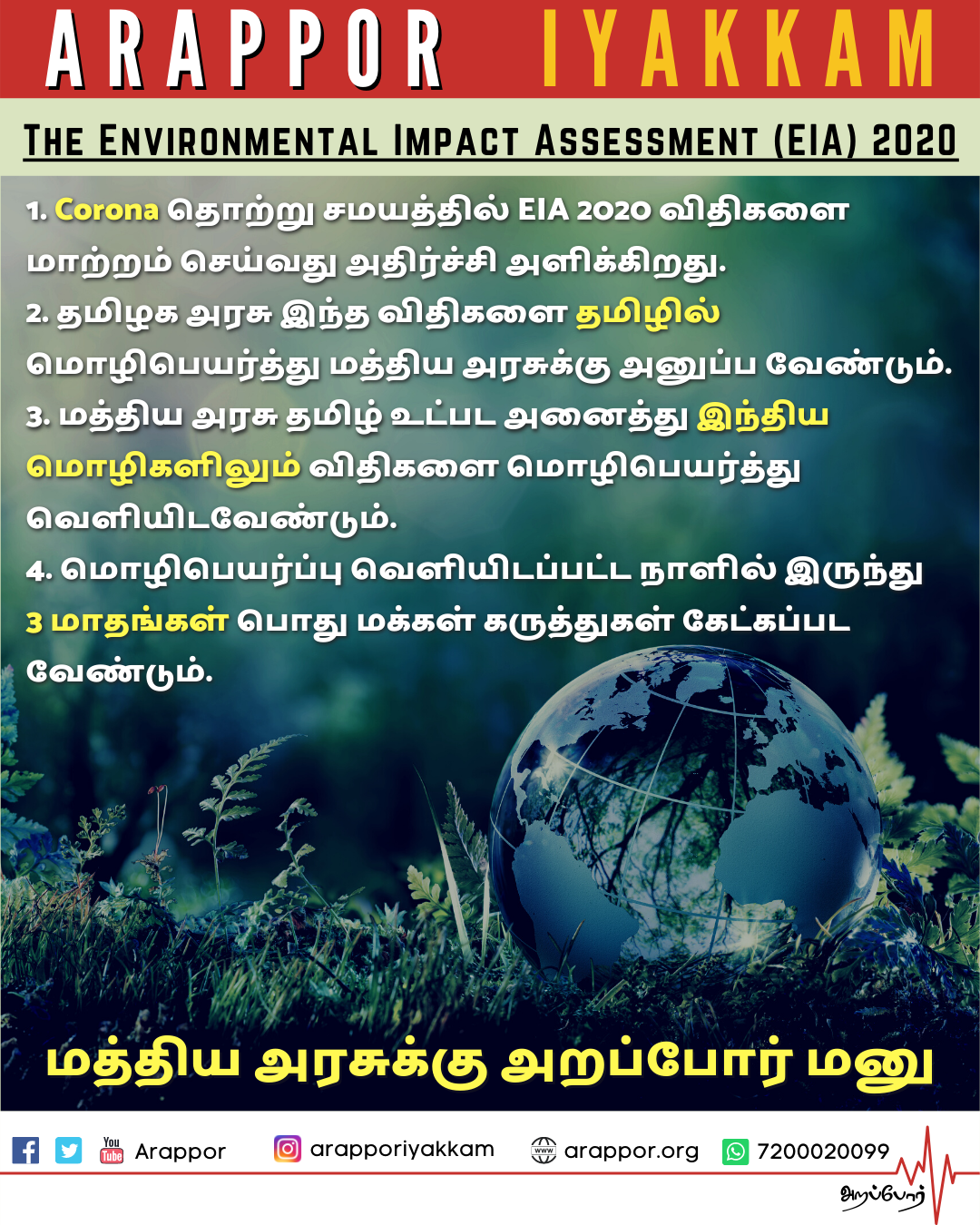 Subject: Translation of Environment Impact Assessment into Tamil and Extension of Timeline for Public Consultation

Arappor Iyakkam has been continuously working on restoration of waterbodies. The Environmental Impact Assessment (EIA) 2020 proposes substantial changes to the existing legislation, and impacts every citizen and their fundamental right of Right to Life and Personal Liberty. It is important to remember that the State is only a trustee of the natural resources according to the Public Trust Doctrine, and that these resources have such great importance to the people as a whole. Firstly, it is shocking that during the pandemic crisis, the Central Government is proposing drastic changes to environmental clearance, which will have a long-term impact on the environment and the people. At this juncture, people do not even have adequate options to express themselves by means of public meetings/gatherings/protests. Next, the Central Government released the EIA, 2020 draft only in English and Hindi. While, it is important for each citizen to understand the proposed changes to EIA, and provide an informed feedback, a majority of the population across the country, who know to read only their vernacular language will not be able to read the draft. Translation is critically important for some of the communities who will be drastically impacted, such as tribal people, fishermen, farmers, and so on. Therefore, it is important to translate the EIA 2020 draft, kindly translate EIA 2020 into all the official languages at least.

The Delhi High Court has already passed orders for translation into local languages in W.P.(C) No.3747/2020 Vikrant Tongad vs. Union of India (MOEFCC), which states “10. Having regard to the Notification which prohibits (i) modernization, (ii) expansion and (iii) establishment of several industries as stated in the Notification and also looking to the far reaching consequences of the public consultation process for which the draft notification has been published, we are of the view that it would be in aid of effective dissemination of the proposed notification if arrangements are made for its translation into other languages as well, at least those mentioned in the Eighth Schedule to the Constitution. Such translation may be undertaken by the Government of India itself, or with the assistance of the respective State Governments, where applicable. Such translations should also be published through the website of the Ministry of Environment, Forest and Climate Change, Government of India as well as on websites of Environment Ministries of all the States as well as those of State Pollution Control Boards, within ten days from today. This would further enable the public to respond to the draft within the period stipulated in this judgment” Similarly, the Karnataka High Court has also directed the Central Government to not publish the draft notification until September 07.

It is reliably learned that the various State Governments are doing the translation into the corresponding regional language and sharing it with the Central Government. Therefore, it is the duty of the TamilNadu Government to immediately translate the EIA 2020 into Tamil and share it with the Central Government and also widely disseminated among the public at the earliest for the benefit of the people. The English and Tamil version should be published on the Department of Environment’s website and TamilNadu Pollution Control Board. The time stated by the Delhi High Court has already elapsed, and this is already contempt of the Delhi High Court.

The Central Government should publish the Tamil version of the draft, along with all other language on its websites, and provide enough time for public feedback of at least three months after the translated versions are published on the Government websites. The Central Government should collate the feedback from various states, incorporate the relevant feedback, and only then finalize the draft EIA. I request the TamilNadu Government to immediately translate EIA 2020 to Tamil at the earliest to ensure that people have enough time to provide feedback on the draft. I request the Central Government to provide an extension of timeline for public feedback of EIA draft for three months from the date on which the translated drafts in all other official languages are published on the Ministry of Environment, Forest and Climate Change website.